What has Napoleon got to do with all this…

To the very last, he [ Napoleon ] had a philosophy;  namely, ‘La carrière ouverte aux talents’,  {translated} The tools to him that can handle them. Thomas Carlyle (1795-1881)

Where did the idea come from…

Captured from an invading French squadron by the Irish in a stormy December just over 200 years ago, a reminder of the Napoleonic era now rests in the National Maritime Museum, Dublin. It is a ship’s longboat, or admiral’s gig that once belonged to the French frigate Résolue and is now the model for Atlantic Challenge gigs. 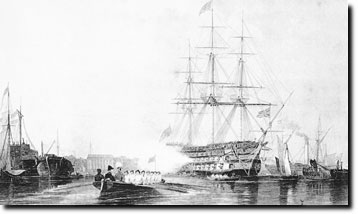 In December 1796 the combined French invasion fleet of three squadrons left Brest. Easterly winds drove two of the squadrons onto the south-west coast of Ireland. Rear-Admiral Neilly’s frigate, Résolue, was rammed by the 74-gun Redoubtable off Bantry Bay and left severely damaged. The Rear-Admiral sent Lieutenant Proteau and seven men for help ashore aboard the Résolue’s admiral’s gig. But help was not forthcoming and the gig was spirited off to a nearby cellar for two centuries.

…almost 200 years later, seven replicas of Rear-Admiral Neilly’s gig – Liberté, Egalité, Fraternité, Amitié, Solidaritié, Unité, Vitalité, Integrité and Communauté left Brest and made sail in the Rade, rode the ebb out of the Goulet and turned south into the Iroise and Baie de Douarnenez, famous in the Napoleonic wars.

Neither Rear-Admiral Neilly nor Napoleon could have guessed that they had provided our youth of many nations with “tools to [them] who could handle them”. Out of the old maritime rituals of war, Atlantic Challenge has fashioned a new maritime ritual of international friendship, understanding and trust in which ambassadors in sea boots from many Atlantic nations are not separated but joined by that sea.

The Biennial Contest of Seamanship